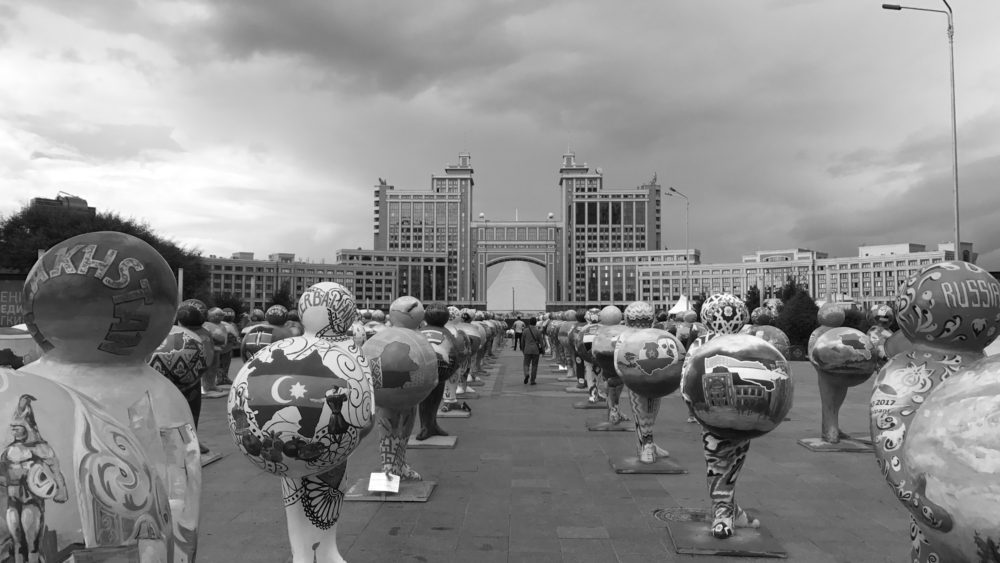 In 1991, Kazachstan in central Asia became independent of the former USSR. Since that time, the 8th largest country in the world rapidly developed. In 1997 the former capital city Alma Aty was replaced by Astana, a new-designed city. This has resulted in a futuristic skyline designed by international architects.

The economy strongly relies on oil and gas resources, making Kazachstan the 17th largest oil producer in the world. Only after 1990 the former Soviet state-run economy could start moving towards a market economy. However, these changes have taken a lot of time. Kazachstan slowly opened up to the wider region, for instance by joining the Eurasiatic Economic Union in 2015.

Further, investments in infrastructure have boosted the economy. The new Silk Road for instance, initiated by China’s President Xi Jinping, connects China with Europe, via Kazachstan’s cities Alma Aty and Astana. Astana’s infrastructure received another boost by hosting and organizing the world expo in 2017. From 10 June – 10 September 2017 Astana, the capital city of Kazachstan, was host of the World Expo. Almost 4 million people visited the World Expo within 3 months. The Netherlands pavilion was designed by Hypsos, stressing the Dutch creative mindset in relation to future energy challenges.

In the context of the world expo 2017, the Astana Contemporary Art Center organized an interesting exhibition about ‘Artists & Robots’. This exhibition showed 17 installations, products of artificial intelligence, fuelled by pioneering artists, ranging from pictures and sculptures to architecture, design and music.

This development where machines or robots are not only intelligent, but also creative, raises questions about the boundaries of art…Discussions have started about whether machines are really ‘creative’ or that they just incrementally learn, and build on existing ideas, compared to humans who can create new concepts and structures.

“The Age of Artificial Imagination: Could a machine do what an artist does? Could a robot replace a painter or a sculpture? To what degree can we talk about artificial creativity?” (‘Artists & Robots’, brochure, Astana Contemporary Art Center, 2017). Creative Industries should embrace these (digital) developments, in order to remain relevant and to be able to anticipate on future challenges. Digitalization of our society will only continue and the message is to experiment and find (or reinvent) your role as a creative.

Concerning Astana, the creation of this ‘artificial city’ is a fascinating product of creative industries in terms of design and architecture. Instead of buiding upon existing structures, a brand new city could be developed.

The question is whether Astana and Kazachstan will be able to continue building on this future perspective, which is still very dependant on oil and gas incomes today. Maybe ‘Artificial Imagination’ can help shaping the future?